Last week I had the opportunity to tour one of the nation’s most notable, aspirational and high performing projects: The Tower at PNC Plaza.

I know the project intimately through Paladino’s sustainability consulting work on the design and construction teams – so it was incredible to walk through the 33-story building and see the vision as a soaring reality.

The Tower serves as the new commercial office headquarters for The PNC Financial Services Group, and features state-of-the-art technology and sustainable innovation. The 781,000 square foot building began construction in spring 2012, and is now officially open with eventually more than 2,200 employees from PNC’s local office buildings beginning to settle in. 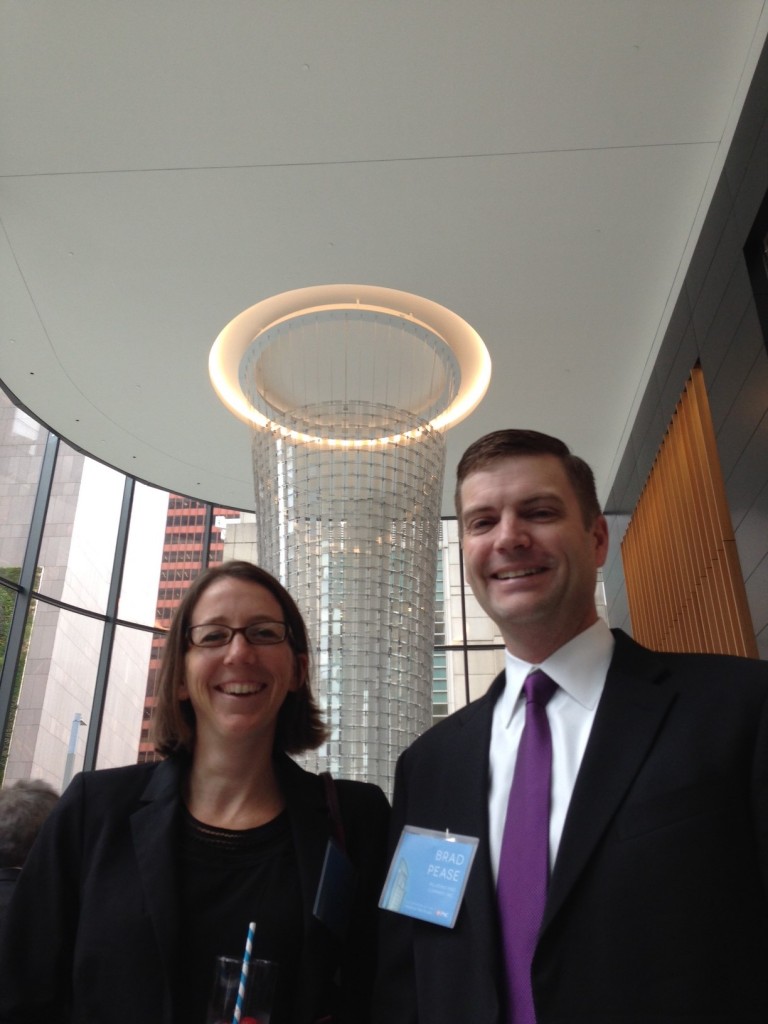 Manager Julia Raish & Director Brad Pease stand in front of the Tower’s Beacon, a lobby chandelier that uses a dynamic display of light, color, sound & text to share live building performance, such as energy use.

Paladino has worked with PNC for more than 10 years, and we are motivated by their ambitious sustainability goals. PNC has more newly constructed LEED certified buildings than any other company in the world, and that would be accomplishment enough. But they took it further by developing the “greenest sky rise in the world,” an immense building that exceeds the industry’s highest performance standard, LEED Platinum.

Paladino served as strategic advisor, guiding PNC and the team through a sustainability design process to ensure their ambitious goals were met.

Defining Sustainability through Pillars of Performance

How do you define “beyond LEED”?  We conducted a comprehensive green building market scan including site visits to Europe’s highest performing buildings; and scans of building technology, competitors, and a community scan encompassing buildings in PNC’s territory.

This research contributed to the project’s sustainability performance criteria, organized around three pillars that mirror PNC’s leadership and defining “beyond LEED”. The pillars are: 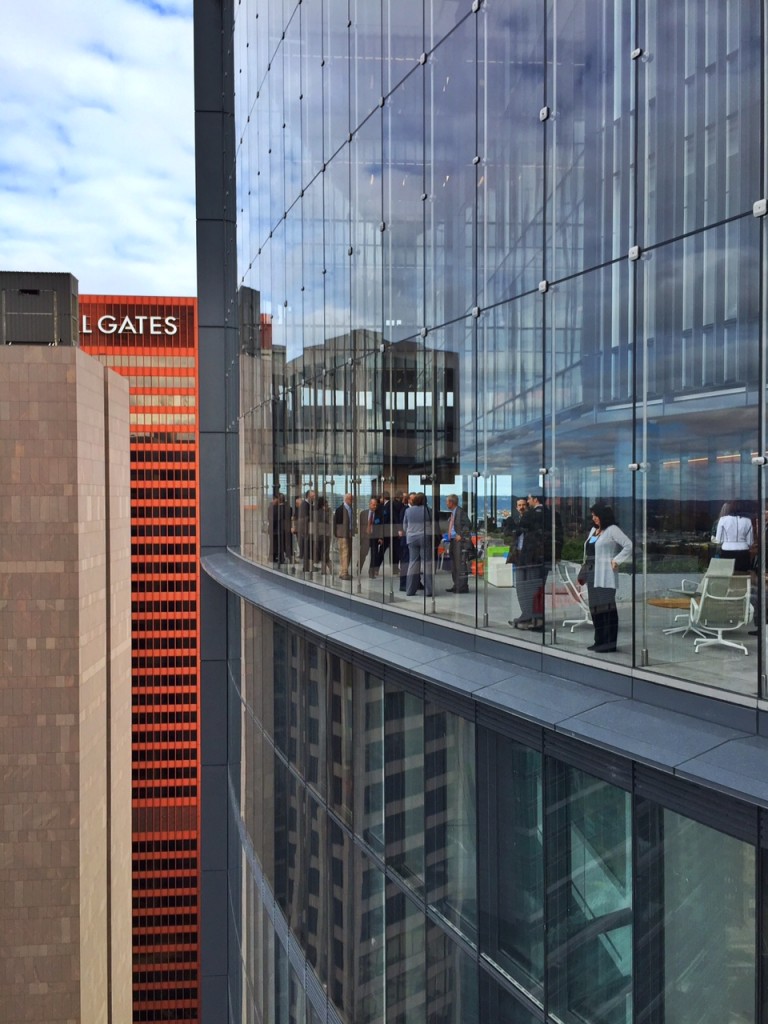 Tower guests take in the view of the Pittsburgh skyline from the 5-story “Park” at the building’s top levels.

This interactive process of setting goals, establishing criteria and then validating the building’s high-performance through measurable and concrete key performance indicators creates a dynamic relationship between the building, the occupants, and the community.

One of the Tower’s most innovative features is its breathable, occupiable double-skin façade. You may have seen this technology in Europe, but it’s rare in the United States. 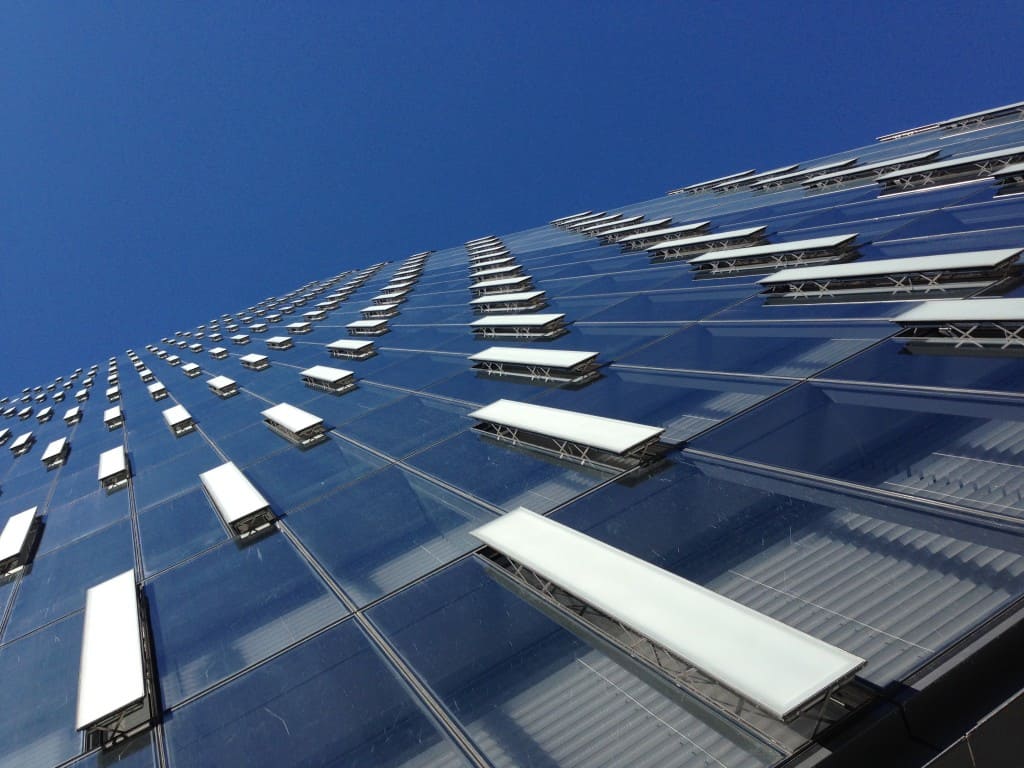 The Tower features both interior and an exterior double-skin façades, which is unique. The exterior wall features a series of air gates that open automatically to vent the façade cavity and admit outside air into the Tower. The interior wall has automatically operated louvers for natural ventilation, which bring that outdoor air into the floors. This interior façade also has manually operated doors that allow occupants to “step outside” for fresh air, contributing to PNC’s goal to provide daylight and natural air for everyone. It is these types of systems that exemplify the company’s belief that high-rise buildings should include innovative, high performance design at a large scale, and in itself meets the criteria defined for each pillar.

The building’s façade is the country’s only fully-automated double-skin façade that is part of a solar-assisted natural ventilation system. The solar chimney, a vertical shaft with a rooftop solar collection panel, creates an updraft that draws cool outside air through the skin, across the floors, and up and out of the building—without expending fan energy—for at least 42% of the year. And during cooler months, a skylight on the Tower’s roof collects and traps the sun’s heat, which is circulated by large fans to naturally heat the building.

A Good Building is Good Business

This building is good business. Every single sustainable feature, technology and design element was a carefully tested and selected financial investment. PNC is committed to verifying technology before making an investment, and therefore developed a mockup of the solar chimney and a 1,200-square-foot test space in which the tower’s technology and design elements were implemented. Testing these elements yielded savings of more than $5 million, and verified that these innovative technologies made sense from a financial, operational, environmental and maintenance perspective. 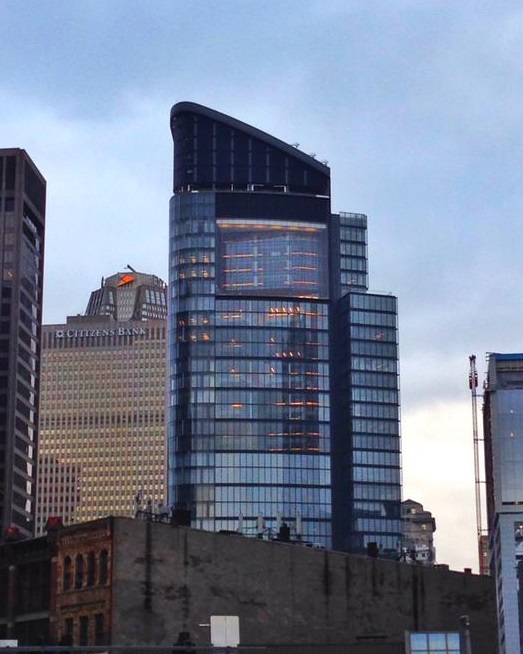 The 33-story Tower at PNC Plaza.

The Tower at PNC Plaza is a feat and a symbol of the progress in innovative sustainability in real estate. We need more companies like PNC to step up as leaders and demonstrate that a green building of this caliber is not only possible, but good for business, good for employees, good for the community, and good for the environment. I expect to see a ripple effect on the next generation of high performing buildings. 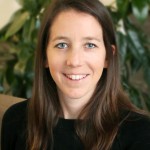 Julia Raish is a manager at Paladino Seattle.