Last month the Maryland Department of Natural Resources announced $700,000 in Climate Resilience Grants to help communities across the state prepare for and recover from climate-related impacts. On the west coast, California voters in June approved a record $4.1 billion bond package that will provide funding to a host of environmental priorities, including climate change resilience and building resilience.

As extreme weather events worsen, and as communities recognize the real and present risk of hard-to-predict seismic events, building resilience is becoming the expectation, but not yet the norm.

We talked to Allison Pyrch of Hart Crowser about building resilience, and the one thing she wishes every architect and developer understood about designing a resilient building.

Allison Pyrch, PE, is a Geotechnical Engineer with 15 years of experience. Allison has worked tirelessly to promote disaster resilience, and was named as a Daily Journal of Commerce 2016 Women of Vision award winner. She was part of the team that developed the Oregon Resilience Plan and is a certified trainer for the California Emergency Management Safety Assessment Program for building evaluations after earthquakes and other disasters. The need for such planning led her to found Salus Resilience, a partnership of Hart Crowser and 2 other firms that offers comprehensive resilience planning.

Allison lives in the Pacific Northwest, where the major earthquake, known as the Cascadia Event, is an eventual certainty.

Allison got interested in climate resilience after traveling with the American Society of Civil Engineers (ASCE) Infrastructure Resilience Division (IRD) to Chile in 2010 and Japan in 2011. Both countries had just experienced major seismic events that caused significant loss of infrastructure, high mortality, and extended recovery periods.

Allison saw first-hand what a M8.8+ earthquake and tsunami can do to a very prepared country during those visits, and realized how far the United States needs to go to meet the bar set by Chile and Japan in terms of preparedness.

Here are some of the highlights of that important conversation about building resilience:

How is the conversation about building resilience changing?

The biggest difference is that more people are aware of the issues and that climate and disaster resilience is an important topic. We’re still taking baby steps in terms of action and infrastructure, but the conversation is at least happening, which is a big improvement since 2010.

Also, we are finally getting traction on the benefits of mitigation and fixing things before the disaster. Building owners and designers are starting to look at long-term and life cycle costs to incorporate resilience and not exclusively at first costs. I hope that project teams can start to change the planning horizon from 2-4-year cycles to the life of the structures and systems we’re designing and maintaining. This topic can seem political, but it really isn’t.

What is one thing that you wish architects, developers, and building owners understood about building resilience?

I wish that architects, developers, and building owners understood that climate and disaster resilience is easy to add in at the beginning of the project. Resilience design can be a big cost if it’s added on as an afterthought or to retrofit or change and existing project. But it makes a lot of financial sense in new projects to think about resilience from the beginning.  As building industry professionals, we have a responsibility to the public. If we build new structures that will make the problem worse after a disaster, we are not helping anyone, including ourselves. We can design buildings that will help the community when disaster strikes.

How is the building resilience issue different from one market to the next?

What really drives the decision to value resilience is who will own the building for the duration of the project. Developers that plan to flip a property are harder to convince than developers who will operate a structure for the long term. If buyers start to demand climate-resilient projects, spec developers will build them.

The interest in climate resilient design also changes based on the interests of the owner. We have worked with some owners who are very interested in climate resilience, but they aren’t thinking about seismic or other hazards. The reverse is true as well.  A truly resilient approach considers all the hazards that could affect the project in its lifetime.  Designing to be sustainable and climate resilient without considering seismic issues in an earthquake-prone region is short-sighted and not very productive.

What is something that architects/developers should do right now?

Architects and developers need to talk to their clients and customers about resilience right now. It makes long-term financial sense, and – just as importantly –  resilience is marketable. Sustainability and resilience conversations should go hand-in-hand. The first-to-market developers that really showcase climate resilient designs will be able to sell their projects at a premium. Right now, people don’t have a choice – but if available, they will choose the more resilient option.

What are some of your favorite examples of resilient buildings, design, and construction?

Beaverton School District has started designing their new schools as resilient buildings to save student lives, and to serve their communities after a disaster. And where they don’t have the funds for the additional resilience pieces now, they are planning for future upgrades.  For example, they are building additional capacity in the electrical panels and rooms for future generators and installing the piping for future water storage tanks.

Water is incredibly important for hospital operations. Having a backup supply is a great way to help serve the community in the event of a disaster. Hart Crowser installed a well at Seattle Children’s Hospital to provide backup water supply if needed. 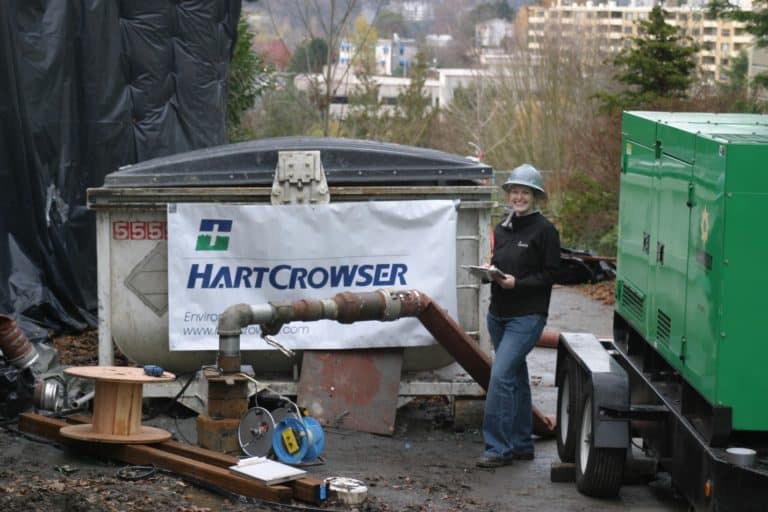 In 1999, the state of Oregon published earthquake hazard maps showing Seaside High School would be severely damaged in a major earthquake and tsunami. Seaside voters passed a $99.7 million bond to relocate this and other schools into safer zones. Seaside Oregon is building a new school campus for their students outside of the tsunami zone and it will be built to help the whole community with repose and recovery after a large earthquake and tsunami.

Washington has developed the Safe Haven program, which picked strategic places to put vertical evacuation in coastal tsunami zones and is applying to FEMA for funds to construct them. So far one is built, one is in design, and a third has gotten funding.

If you would like to learn more about climate resilient techniques for new and existing buildings, download Paladino’s ebook here: https://www.paladinoandco.com/download-center/resilience-design-for-new-and-existing-buildings/

You can learn about Salus Resilience at www.salusresilience.com.