Concrete is widely recognized as a major source of carbon emissions and pollution. In this post, we are going to talk about the real carbon culprit in concrete, which is cement. In fact, the cement industry puts more than 2 billion tons of carbon into the air each year (source).

Concrete is not the enemy

The real carbon offender in concrete is the cement that is used in concrete.

The commercial real estate sector loves concrete. Rapid Strength Concrete (RSC) can gain strength of more than 3,000 psi in as little as two hours. That’s hard to compete with. Concrete is strong and durable, it hardens quickly, it’s familiar, and its use is on the rise – the global rapid strength concrete market is slated to witness massive gains over the coming years due to the increasing focus on infrastructure development worldwide.

The strength of the concrete is directly related to the volume of cement in the concrete. So the rise in RSC has a real carbon problem.

Cement is all around us, but few people really understand what it is or how it’s made. Cement is made by heating limestone to more than 2700 degrees F. Often the kilns are brought to those temperatures using coal (which accounts for 40% of the industry’s emissions). The heat eventually causes the limestone to break down into lime (calcium oxide) and releases CO2 straight into the atmosphere, accounting for another 60% of the industry’s emissions. The lime reacts with clay inside the kiln to form a substance called “clinker” which is mixed with gypsum and ground into portland cement, which is a powder. The portland cement is mixed with water, sand, and gravel to form concrete.

What you can do 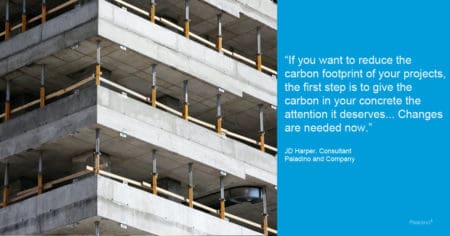 If you want to reduce the carbon footprint of your projects, the first step is to give the issue of carbon in concrete the attention it deserves. Our opportunity to prevent catastrophic climate change shrinks every day, so changes are needed now. Broadly, reducing the impact of portland cement can fall into two general approaches, most effective when used together.

Think about your use of concrete early in the design process. Have you considered whether your project is pouring more concrete than is necessary? Could the concrete be supplemented with 3-D printing, better modeling, and adaptive design? Can concrete be replaced by rammed earth walls, especially for site and landscaping work? If you use timber instead of steel, or rust-free steel alternatives like carbon-fiber rebars, can you use less cement? Can you use concrete made with clay for non-loadbearing walls?

Which parts of your building use the most concrete? Can you address the embodied carbon of your concrete with innovative designs like contour mat slab, or schedule adjustments to allow more time for the slabs to strip and concrete to cure?

Once you’ve reduced the amount of concrete needed overall, next reduce the amount of portland cement within the mix designs. There are a variety of strategies for this as well.

There is a lot of competition among concrete manufacturers, so you can apply pressure through the procurement process by including embodied carbon reduction goals on your project. It is important to be as specific in the reduction targets as you can and ask about vendors’ carbon strategies early. Innovation on carbon will benefit the vendors – the investment concrete manufacturers make in carbon reduction strategies will become a market differentiator as more projects and owners demand reduced carbon on projects. You are likely to see a change in the industry as additional pressure comes from governments and owners. Support regulators and companies that are addressing carbon in the built environment.

Encourage contractors to work with experts to reduce the embodied carbon in your project. Companies like Climate Earth will engage the concrete manufacturer early in the design process to set them up for creating mix-specific EPDs at the plant level. This also gives concrete suppliers a competitive edge for future projects.

Reward innovation by testing and trying new cement concepts. There’s an emerging technology of “carbon-cured” cement, which sucks carbon from the air rather than being cured with water. Check out Solidia, which claims that every metric ton of cement it makes can absorb and potentially permanently store 240 kilograms of CO2.

As density in urban environments grows and more people move to cities, the demand for concrete and cement is going to rise. Our industry has been effective at addressing energy, which required a combination of market demand, regulatory requirements, rating systems, and industry innovation. Carbon is the next frontier to address climate change, and top of the list of issues is concrete.

If you have a project that has innovated to reduce the environmental impact of typical concrete practices, please share!