Every year, December 7 always seems to catch me by surprise. I’ll be perusing the news and without fail, there will be a story about Pearl Harbor Day. It happened to me just last night where I watched an interview with a 103-year-old veteran, one of the oldest living survivors of the attack on Pearl Harbor.

It’s a day that many of us don’t pay much attention to; it’s not a national holiday and it rarely makes enough news to make it to the water cooler. For me, however, it is a very special day, one in which brings me back to a long and difficult journey to assist in the design of the Pearl Harbor Memorial Visitor’s Center.

I can remember Mike Hamm, then principal in charge of the Portico Group and now retired, standing in front of the room of designers in 2006, representatives from the National Park Service, US Navy, and veterans to kick the project off. Mike started the meeting by asking all of us to say some words about what the project meant to them as a way to break the ice.

What was intended to be a 15 minute introduction turned into more than an hour of storytelling, personal reflection, and tears. I heard stories of veterans returning to visit lost their ship mates, both those living and those that had past whose remains were to be entombed in their ship. I heard first hand accounts of how a Hawaiian paradise turned into the site of one of the most tragic events in US history in just 11 minutes. I learned of the Japanese airmen who were visiting the memorial to reconcile with American veterans, and the pain, relief, healing and joy that was had through that shared experience. I heard stories of the droves of families that had come to the memorial not expecting much only to leave with a lasting impact that changed their understanding of the world around them.

That last story was mine.

I don’t remember too much from my first vacation to Hawaii, but I do remember standing on the memorial deck overtop the sunken ship, watching oil bubble to the surface from the below. Here I was nearly 50 years after the attack and the wound from that day was still bleeding. I remember learning that the primary reason for the attack was that the US stopped supplying oil to Japan that they needed to fuel their conflict with China. I remember drawing the connection between the leaking oil, the reason for the attack, and our stop at a gas station to fill up on the way back to the beach from the memorial. I felt like I was unknowingly supporting a scenario in which history was going to repeat itself. That day I felt it was my responsibility to do something about it.

Fast forward to December 7th, 2010, and I again was returning to the Pearl Harbor Visitor Center. This time it was to open the new facility and I witnessed firsthand the annual remembrance ceremony. This time, I was there with my wife and newborn son. What an honor it was to share that moment of time with those I love most, and to know that I was fulfilling a goal of mine that was formed more than 20 years ago. The highlight for me was standing in front of an educational display of the project’s green building features and seeing one of the drawings I made that day back in 2006 at the kick-off. 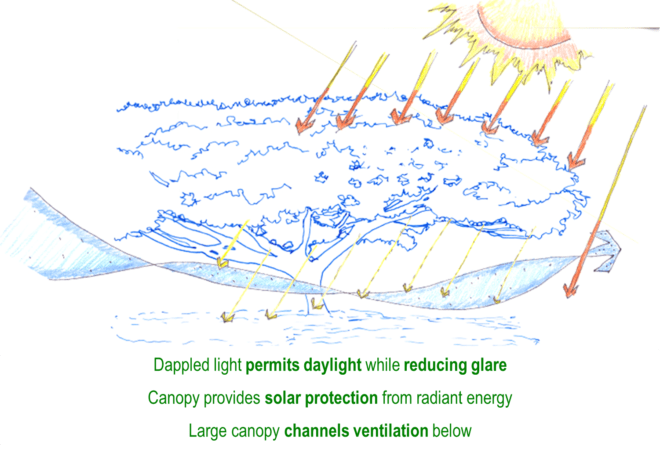 The design of the center was modeled off a Monkey Pod tree. This passive strategy helped us reduce the energy use intensity by more than 50% than its baseline. With power on the islands primarily supplied through imported oil, I was, and still very much am, proud to know that I played a part in “doing” something to prevent future events like December 7th, 1941. With a projected 1.8 million annual visitors passing by that display, I know that that impact occurs every day it is open to the public.

The design of the visitor center became much more than another project for everyone who had the honor to work on it. We began the project as strangers, but have developed lifelong relationships through the shared emotional experience of doing everything we could to make the project a success. The outcome, I hope, honors the memory, courage, and sacrifice of our men and women in the armed forces. It’s a day that we cannot forget, or pass by, without at least spending a moment to share the history with those we love most.

On December 7th, I hope you too will share a moment with the next generation, and pass on the lessons of history.