The Living Future 2017 Unconference is rooted in the built environment, but this year the biggest takeaway was not a new building system or design innovation. The conversation of the week-long gathering focused instead on how to initiate change and create the sustainability vision for the world that we are all working so hard to design, engineer, and build.

Each year, this unconventional conference provides inspiration, energy, and a healthy perspective shift. What was especially powerful this year was the central message that was echoed by each of the excellent keynote speakers. Each, in their own words, pointed back to one word about how we will achieve this radical change: Culture.

Seattle mayoral candidate Nikkita Oliver kicked off the week in her unique oratorical style, relating that listening to and empowering culture while embracing the values of citizens from different backgrounds can create positive change in the city. In one of many examples, Nikkita has shown through her work in Seattle that art is a viable alternative to incarceration. Van Jones, during his keynote later that evening said of Olivier’s speech, “In my line of work, most would consider much of what [Nikkita] said as political suicide – but I bet she won your vote.”

Living Future’s 2017 first artist-in-residence, Favianna Rodriguez, followed Oliver and reminded us that culture moves faster than politics. To create the sustainability vision we want in our communities, we need to activate culture and art. Artwork, in its various forms, often represents how we view the world, both present and future. “For instance,” she said, “what will rom coms be like when renewable energy is standard?” Meaning, if our movies, TV shows, social media, and magazines all depicted neighborhoods and buildings with culturally rich and environmentally responsible real estate, wouldn’t that influence the way real world decisions are made?

Keynote speaker Van Jones, civil rights leader, former Obama White House advisor, and CNN political correspondent, also spoke about the importance of culture in expanding a sustainability vision to the broader public consciousness. He felt that we are in a time of civilization crisis, struggling to find an identity. In times like these, he observed that three types of leaders emerge: artists, intellectuals, and mystics. These leaders are better suited to provide a vision and leadership than political leaders.

Jones related how it can be easy to take on the characteristics of who or what you’re fighting, especially in times of crisis; that many problems cannot be solved at the ego level if emotions or self-interest take over. This is why it is so important to have visionaries who can see beyond the strife because their experience is rooted in culture and not a typical political background. These leaders can guide sustainable solutions that are easily translated, supported, and enacted by others.

The theme of culture driving change continued each day of the conference. Thursday morning, Kirsti Luke, Chief Executive, Tuhoe Te Uru Taumatua, Ngai Tuhoe’s Tribal Authority and champion for one of the most transformative certified Living Buildings in New Zealand, opened the day with a heartfelt address. She described how she is working to change the culture of her people, finding their way to being indigenous (again). She spoke of the taming of self-interest in order to find common ground and positive compromise. Kirsti helped us understand that sustainability is much more than the building systems and materials. For her, her people are front and center of the environmental issue. The Living Building project was a platform for indigenous people to learn new trades, build confidence, and connect to each other through a shared goal. 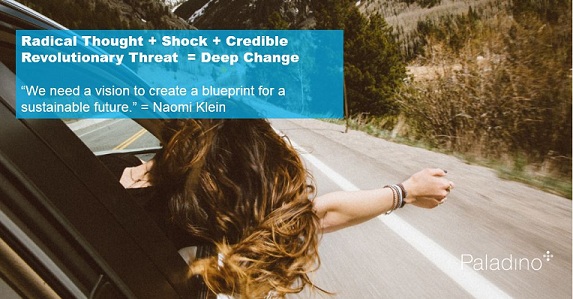 She discussed the balance between No and Yes. “Saying no is not enough,” she said. It is ok to resist, but we need to add vision, “revive the utopian imagination … and create a blueprint for a just, sustainable future.” She urged us to speak in the language of big ideas – which is a familiar concept to those of us engaged with Living Future. She pointed to a recent political example – Bernie Sanders’ presidential campaign – which “showed that a new future is popular.” The messages of “free college, universal health care, and 100% renewables won 20 states and 13 million votes.”

Klein emphasized that the culture itself must be changed, not just the policies. And that we must stop extraction and move to regeneration –  of the environment and of people. “’No’ brings people to the table,” she concluded, “but ‘Yes’ is the light that will keep us from losing our way.” This reminded me so much of our driving principle of Abundance Thinking, and validated our belief that we have everything we need to realize everything we want.

The Living Building Challenge set a precedent by including Equity alongside Energy, Water, and Materials when evaluating a building’s performance. The conference session that focused on equity in building projects has grown significantly in the last few years. This year’s session, “Designing for Social Equity’, highlighted Seattle’s Liberty Bank project, which revived the history of Liberty Bank, the first minority-owned bank on the west coast and which aimed to re-energize the city’s Africatown neighborhood.

Patty Southard, of King County Green Tools, summed up this new focus on culture best during this session. “Too often”, she said, “we in the sustainable design movement lead with the ecologically restorative question, but what if every project instead started with the question, ‘How do we make this place socially just and culturally rich?’”

I suggest we embrace this new approach to creating sustainable real estate. Culture is a big word with many meanings. The next big frontier in expanding sustainability consciousness will be driven by culture. I believe it is time to use this lever for big change and realize what we didn’t even know was possible.