Bicyclists in Washington are keenly aware of the exceptional biking privileges available throughout the state. Aside from Washington’s unparalleled scenic beauty, cyclists have ample access to designated bike lanes, numerous paths, and not to mention the comradery of an abundant biking culture.

Recently, Washington’s biking superiority has been quantified in numbers: last month, a report was published by the League of American Bicyclists ranking Washington as the most bike-friendly of all 50 states.

On a scale from zero to 100, Washington came in first place with a score of 66.2, and has held its top spot since the ranking began in 2008. With scores based on data provided by each state’s department of transportation, the League took into consideration elements such as numerous bike lanes, wide shoulders, cyclist access to major bridges and tunnels, lower speed limits, low cyclist fatalities and citywide promotion and advocacy.

Recognizing our good fortune of living in the most bike-friendly state, our biggest biking advocates in Paladino’s Seattle office jumped at the chance to team up and participate in this year’s Cascade Bicycle Club “National Bike to Work Month” throughout the month of May. The friendly competition encourages and challenges city residents to forego other modes of transportation, strap on their helmets and ride their bicycles to work as much as possible.

Team captains Dieter Siperko and April Rice encouraged staff to take the challenge, organizing bike support meetings and breakfast for those who chose to ride. Fortunately, Paladino’s Seattle office is well equipped to handle the influx of bikers with our in-house bike wall rack and central location. 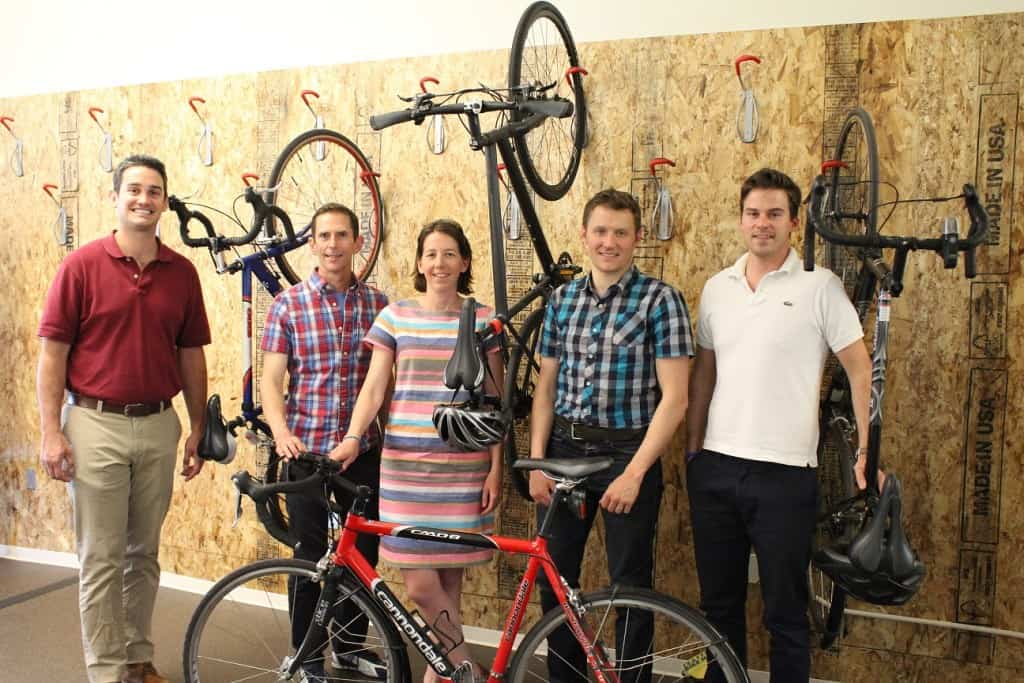 Some of Paladino’s Bike to Work Month participants gather at the office bike wall.

This year, participants were able to track their bike trips online. So how did we do? Here are our Bike to Work Month statistics:

With the state of Maryland also ranking in the top ten of bike-friendly states, Paladino’s East Coast team was up for the bike to work challenge. Team DC participated in the Big Green Commute during Bike to Work Week, a competition for offices in the Washington, DC region that encourages employees to adopt sustainable transportation. The competition gathered 58 participating offices, collectively biking 142,371 miles and raising over $5,500 to benefit the Coalition for Smarter Growth and Community of Hope.

Our team isn’t new to putting the tires to the bike lane. Paladino is a BizCycle Gold certified workplace, one of few in the Seattle region, representing our commitment to healthier and happier staff while making a difference in our community and lowering our carbon footprint. We plan to honor this commitment beyond Bike to Work Month as our biking evangelists continue to commute throughout the year.

Did you participate in this year’s Bike to Work Month? Tell us about your experience in the comments below.