The topping off ceremony in June brought together government officials, labor dignitaries, constructions workers, PNC’s employees and members of the project team, including Tom Paladino, CEO of Paladino and Company, who served as the owner’s representative for sustainability on the project.

Below is a video from the Iron Workers Local Union No 3 of the final steel beam being raised to top off the building.

PNC has certified 225 projects to LEED standards, earning recognition from USGBC for building more new LEED certified buildings than any other company in the world.

Paladino CEO Tom Paladino said “We are incredibly proud of the role we’ve played in developing the sustainability vision for this capstone project. PNC set a lofty goal when they asked the team to go beyond LEED Platinum and aim to create the ‘greenest skyrise in the world’, and the team has done just that. When it is complete in 2015, The Tower at PNC Plaza will set a new standard for green office towers.”

The design strategy rests upon three pillars of performance: Community Builder, Workplace Innovator and Energy Responder. As a result, the Tower sets a new bar for energy efficiency; creates engagement value for PNC, its employees and the Pittsburgh community; and demonstrates that high aspiration green is achievable for a commercial office high-rise. 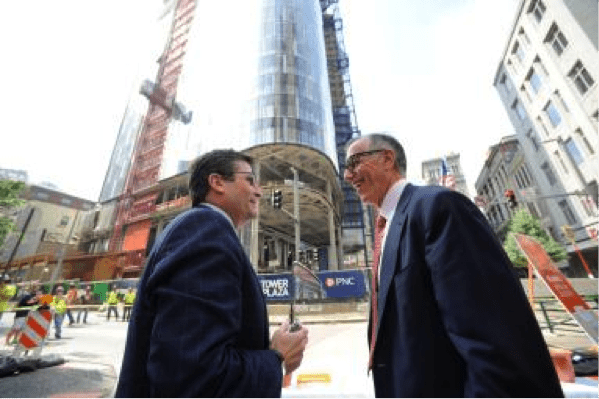 The new tower’s groundbreaking innovations include:

In its press release announcing the topping off of the 800,000-square-foot tower, PNC Chairman, President and CEO Bill Demchak, said, “The new headquarters will serve as a statement about the importance that we place on sustainability and innovation and on providing the best possible environment for our employees.”