At Paladino, we’ve proven that sustainability can be leveraged to create value in many ways – from top line revenue and operational savings to healthy, happy workers and environmental stewardship.

That means that sustainability leaders can come in many shapes and sizes – even 300 pounders that can run a 40-yard dash in 4.7 seconds.

Wait, what was that?

The Philadelphia Eagles and the New England Patriots are squaring off at U.S. Bank Stadium in Minneapolis, Minnesota on February 4th. City planners expect the Super Bowl to draw 125,000 visitors to the Twin Cities region, and 1 million visitors are anticipated to attend the game and Super Bowl festivities.

Understandably, this will have a big impact on energy and water consumption, waste management, and carbon emissions.

Minneapolis is listed as one of the 25 U.S. cities most affected by climate change (along with St. Paul Minnesota) in the weather.com Climate Disruption Index, which looked at six factors ranging from extreme precipitation to sea-level rise to determine which places across our country will get hit hardest by climate change. Minneapolis, with a population of 400,070 came in number two on the list. And given the city’s aggressive sustainability plan, which targets energy production and consumption as its driving narrative, the Super Bowl is an opportunity to put that plan into action and show the world how green the big game can (and should) be. 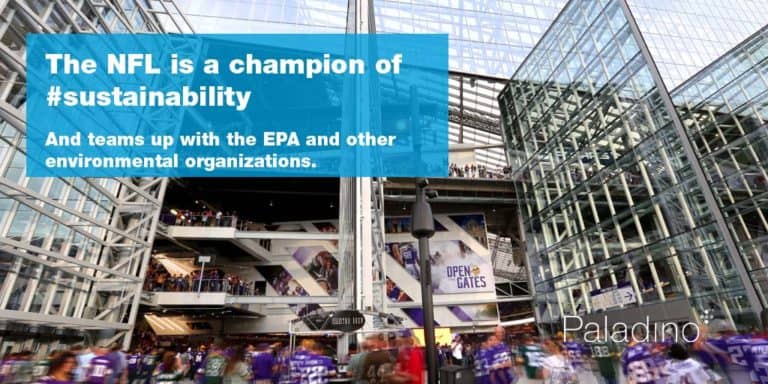 And would you have guessed that the NFL has become a champion of sustainability? The NFL has teamed up with the EPA, Natural Resource Defense Council, and other environmental organizations to reduce energy consumption, water consumption, diversion from landfills, and to reduce food waste. As is tradition, the NFL kicked off Super Bowl LII celebrations with a traditional tree planting in Minneapolis.

Score! This is not the first (or last) greener game!

The Host Committee for the 2016 Super Bowl 50 in San Francisco made a public commitment to sustainability, which set a new tone for social responsibility as it relates to this massive sporting event. This was no surprise, given that San Francisco’s Levi’s Stadium was the first NFL stadium to achieve LEED Gold certification.

And you might remember Super Bowl XLVII’s big moment – not when Beyoncé took the stage – it was when the lights went out for 20 solid minutes. That unexpected NFL blackout shined a light on the need for reliable and renewable power at NFL stadiums.

So the Host Committee for the 2017 Super Bowl LI in Houston pushed sustainability even further, by investing in 600 solar panels which would power the new and improved LED lighting system at Houston’s NRG Stadium. This made NRG Stadium one of the first stadiums to exclusively use LED lighting on the field – reducing energy consumption for field lighting by 60%. NRG also offered renewable energy credits for all event venues associated with the Super Bowl including the George R. Brown Convention Center and team hotels. 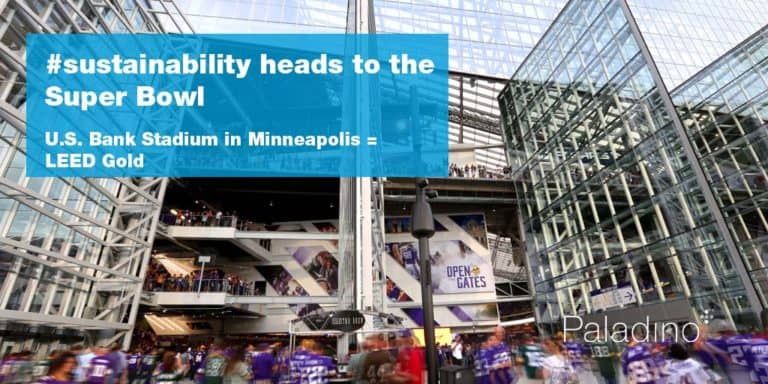 The City of Minneapolis, the Minneapolis Super Bowl Host Committee, and the NFL each have different priorities and values – and they have each found value in committing to sustainability. The halftime ads won’t bring attention to these advancements, and that’s okay – they aren’t necessarily for show. But whether the City is reducing carbon emissions to get off that weather.com list; or the host committee is managing transportation to reduce congestion, with lower emissions as a bonus; or the NFL is improving its brand reputation through social responsibility – there are good reasons on all sides.

Super Bowl LIII will be held in Atlanta at the Mercedes-Benz Stadium, which claims to be the most sustainable sports venue in the world and is the first professional sports stadium to achieve LEED Platinum in the United States (impressive!).

We are glad to see that the sports community is taking this green ball and running with it!

Note: Paladino is not associated with the NFL, the Super Bowl, or any of the stadiums referenced in this post.