The environmental and sustainability movement has been an exercise in market transformation. Participation in the movement can be as narrow as an individual making a personal commitment, and as broad as a multi-nation effort like the Paris Climate Agreement.

Market transformation: the strategic process of intervening in a market to create lasting change in market behavior.

Whether it’s seatbelts, manufacturing automation, gender equality, or mass transit, any transformation begins with innovators who wrangle in some early adopters. The early adopters learn a few things, showcase the benefits of their innovation, and start to build momentum toward an early majority. The early majority creates the groundswell to move something from fringe to mainstream; which finally convinces the late majority that they had better get onboard. The last group, the laggards are the final and least likely group to make significant change. They also have the weakest opportunity to profit and benefit from the market change.

Two recent studies by Pew Research Center and WalletHub shined a light on where we are in the market transformation curve for environmentalism and sustainability.

Environmentalism is on the rise in the United States, as evidenced by a  recent Pew Research Center survey that found that 74% of US adults believe the country should do whatever it takes to protect the environment. Within this percentage, there are varying ideas about how we should take action, and we are seeing large organizations and even whole cities enact policies to battle climate change.

A WalletHub study compared 100 cities to analyze how much these cities are doing to promote a more sustainable lifestyle. The study compared the cities across four key dimensions: environment, transportation, energy sources, and lifestyle & policy. These dimensions were then evaluated using 26 different green metrics which were each graded on a 100-point scale, with a score of 100 representing the greenest practices and policies. A few of the metric examples include: highest percent of green space; lowest percent of commuters who drive; highest bike score; and greenhouse gas emissions per capita.

Looking at the overall rankings, it is no surprise to see that some of the well-known early adopter sustainable cities like Portland, Seattle, and San Francisco are within the top ten. Cities sitting in the top 20 also have my attention – these are the early majority, so I’ve got my eye on you, Minneapolis, Madison, and Orlando.

The early majority is a powerful group. Early majority adopters like to be part of a group, and they typically have loyalty to the innovation once they adopt it. Once a city commits to climate action, they are unlikely to drop the commitment.

So let’s look at these early majority cities and see what we can learn from them. 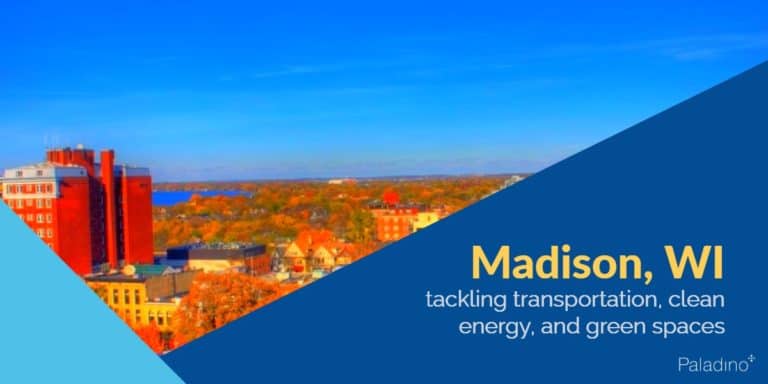 While Madison ranked 13 overall, the city comes in third on the transportation dimension and ninth on the environmental dimension. Madison also ranked as the city with the third highest bike score.

Madison unveiled an updated sustainability plan in 2011, comprised of ten categories that address the environment, economy, and social/community health of the city. The plan lays out time-bound goals with strategies to achieve them through community partnerships and policy updates.

For example, like many other cities, Madison has pledged to reduce its carbon footprint by reducing car miles traveled and increasing low-carbon fuel use to achieve a 40% emissions reduction by 2030. Bike-friendliness contributes towards this goal, so Madison created a bike-share program with more than two-dozen stations and resources like interactive maps. The city also has an extensive bus program with tax incentive programs for employers who pay for part of their employees’ public transit costs.

Madison also intends to obtain 25% of electricity, heating, and transportation energy from clean energy sources by 2025. In 2016, Madison updated its solar installation program, MadiSUN, including a group purchase program for residential rooftop solar and an affordable solar energy loan program and strong incentives for businesses. 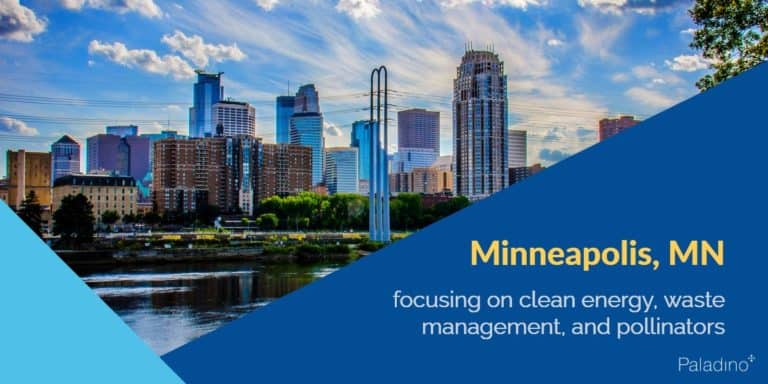 Minneapolis ranked 12th. The city has extensive sustainability goals it intends to accomplish by 2025, including generating 10% of electricity from local, renewable sources; constructing 30 miles of on-street, protected bicycle facilities; and decreasing the city’s amount of waste generated.

In 2017, Minneapolis implemented a zero-waste plan to contribute to its goals of recycling and composting 50% of its overall waste by 2020, 80% by 2030, and a zero-percent growth rate in the total waste stream from 2010 levels. The plan divides the city by type of waste-generation (residential, commercial, city operations, etc.) and analyzes the level of difficulty of landfill diversion potential.

Minneapolis has also instituted sustainability policies that touch on everything from low-impact cleaning to a vegetative management policy. The city implemented a LEED building policy in 2006 that mandates that significantly renovated municipal facilities of 5,000 square feet or greater must be built to a LEED Silver level of certification or better.

Minneapolis is tackling biodiversity through its pollinator resolution policy,  which will increase the planting of pollinator-friendly plants and refrain from using harmful pesticides.

Ranking at #28, Orlando has made strides in sustainable development since Greenworks Orlando was established in 2007 by Mayor Dyer. Since then, Orlando has completed large-scale transportation enhancement projects, launched a bike sharing program, and has completed ten LEED certified municipal buildings with more certification projects under construction.

Orlando’s Municipal sustainability plan debuted in 2012 with 12 goals across many environmental subjects.

Goal 1: Greenhouse gas neutral for municipal operations by 2030. The city reduced its greenhouse gas levels by 6% by 2016. Tactics include the implementation of the Lucid building OS dashboard, which provides more accurate readings of the city’s electricity, water, and fuel use, which allows for better programs to be implemented at a city-wide level.

Orlando provided updates on the community action plan in released in 2013, which set stringent environmental goals for the city to hit by 2040. Some of the highlights include:

Cities across the United States are doing their part to combat climate change. Through policy updates, community partnerships, and innovative programs, cities are showing that climate change is high on their priority list.

Paladino works with the public and private sector to develop climate action plans and market transformation strategies. The goal is to harness the market transformation model to quickly impact results on the sustainability strategies that are best aligned to the city or organization. Adoption happens when the innovation brings value and impact. Kudos to every city that is taking action on climate, regardless of where they fall on the curve!