Natural capital is increasingly recognized for its ability to contribute to better decision-making in built environments: site planning, infrastructure, building/tenant upgrades, energy and water efficiencies, etc.  and is valued at $145 trillion/year, twice as much as global aggregate GDP.

Sustainability strategies are most successful when they make business sense. And business works best when innovative ideas are used to make money. Are you missing the opportunity to improve your top line by neglecting the economic value of natural capital?

Natural capital can be defined as the world’s stocks of natural assets. The World Forum on Natural Capital sums it up like this:

Our work with architects, developers, and real estate owners is based on our belief that we have everything we need to have everything we want (we call it Abundance Thinking). Typically, discussions around sustainability, wellness, and climate resilience center on obvious factors like energy, water, and air quality. Every time a project team overlooks the economic value of natural capital, an opportunity to optimize a project is missed. 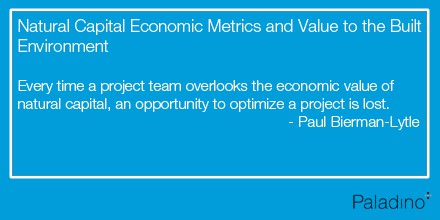 Natural capital is priceless, but it is also measurable because it contributes to ecosystem services, regulates the atmosphere, mitigates or prevents floods, supports tourism, supports food production, and has market value. For example, the City of Grand Rapids, Michigan evaluated the value of its urban forest: 1,283,000 trees. Results demonstrate $1.83M/year of pollution review; $30.2M of carbon storage (227,000 tons); $1.01M/year of avoided stormwater runoff; $722k/year in building energy savings; $161k /year of avoided carbon emissions; and structural value of their urban forests. When you put it all together, the urban forest contributes $791M in natural capital to the City of Grand Rapids. As the International Union for Conservation of Nature (IUCN) states, “In our search for better management of natural capital, cities are where the difference can be made.” (source)

The city of Barnet, a London borough, has quantified the economic, social and environmental benefits of its green infrastructure. Their study, Corporate Natural Capital Account, estimates these benefits total more than $1.1 billion over the next 25 years, with the costs of maintaining them at $77.3 million. (source)  Clearly, cities are recognizing that investing in natural capital can help mitigate complex challenges, such as flooding, heat and air pollution, carbon sequestration, and human well-being.

By 2050, it is projected that two out of every three people will live in urban areas. More studies are emerging that explore how urban nature can affect the health and well-being of city residents. A larger number of cities are answering the call to bring nature into their traditionally, asphalt, concrete, and automobile-friendly environments.  One of the rising stars includes Tampa, Florida, which has recently been named the city with the most trees worldwide. This accolade, according to Senseable City Lab at MIT, calculates a tree cover of more than 36.1%, or one third, of the city.

How do you account for the economic benefit of natural capital on any given development?

This is in practice worldwide, and typically prioritized when the project is in a threatened natural environment.

General Motors implemented an urban garden project on a rooftop garden at the parking garage adjacent to their world headquarters in Detroit. In addition to producing just shy of 200 pounds of vegetables, the garden includes honeybee hives that help to pollinate the gardens. They even insulate the hives with manufacturing scrap.

COOKFOX designed a new office in New York City in 2017 and included three terraces planted with original sedum from their former office. In addition to the native shrubs, trees, and wildflowers, the terraces are home to two beehives that are managed by staff volunteers. COOKFOX’s commitment to their bees and natural spaces in the heart of NYC helps them to tell their story, illustrating both their commitment to the environment and their commitment to employee wellness. If you’d like to read about our work with COOKFOX on their new HQ, the case study is here.

These are just a few examples of organizations using their natural capital. Universities, corporations, cities, and neighborhoods are discovering the benefits of showcasing their natural capital and taking advantage of the marketability of their natural assets. These attributes can be quantified by evaluating costs to recruit talent, retain talent, reduce sick days, absenteeism, presenteeism, while increasing productivity, employee morale, marketing and corporate social responsibility.

The next generation of business leaders will need to understand:

Cities, neighborhoods, campuses, and built environments enjoy an abundance of natural capital that’s often taken for granted. These assets play an essential role in climate resilience. What is the value of the natural environment assets for your next project? 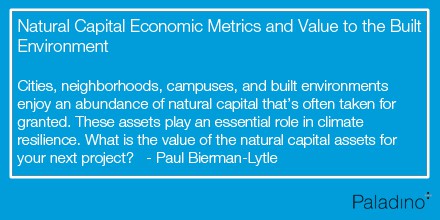