Today, the U.S. Green Building Council (USGBC) released its national ranking of the top states in the country for LEED green building and Washington is the fourth state in the nation for 2015. The rankings come at an important time for states looking to reduce their energy use. LEED-certified spaces use less energy and water resources, save money for families, businesses and taxpayers, reduce carbon emissions and create a healthier environment for residents, workers and the larger community.

“Washington is a nationwide leader in green building and LEED certification. LEED creates jobs and increases opportunities for Washington’s workers and businesses while contributing billions of dollars to the state’s economy,” said Rick Fedrizzi, CEO and founding chair of USGBC. “LEED has become an essential standard for the transformation of building design and construction. LEED certified buildings drive economic growth, creates jobs and makes communities healthier.”

The annual ranking is developed by analyzing each state in terms of square feet of LEED certified space per state resident. Now in its sixth year, the list highlights states throughout the country that made significant strides in sustainable building design, construction and transformation throughout 2015. Washington certified 101 projects representing 17,450,321 square feet of real estate, or 2.6 square feet per resident, in 2015. 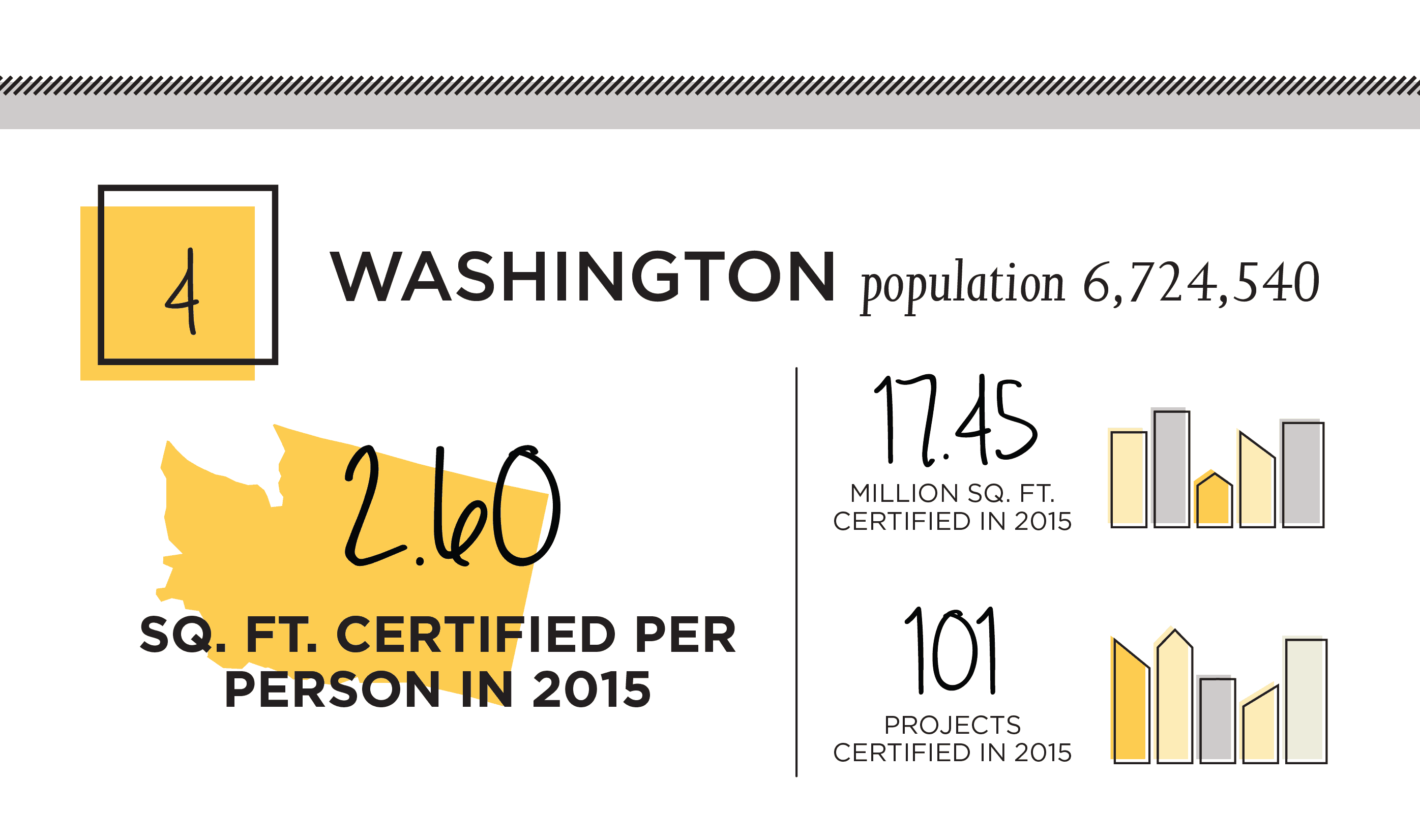 “Every time a building is LEED certified, there is a story to tell – particularly in this market where LEED certification is a choice. Knowing how many owners, developers, architects, and builders came together, driven by their personal and professional values, to do their part in the fight against climate change serves as proof of Washington state’s committed real estate community,” said Tom Paladino, CEO of Seattle-based Paladino and Company and an integral co-creator of the original LEED program. “Over the last 15 years, I’ve witnessed LEED’s evolution, from its modest beginnings as a sketch on a napkin to what it is today – a global force for change. We are all accountable for the betterment of our planet and I applaud these top 10 states, and everyone who furthers the green building movement.”

In addition, data from USGBC’s 2015 Green Building Economic Impact Study show LEED construction is expected to support 147,000 total jobs in Illinois and have a total impact on GDP of $12.87 billion from 2015-2018.

A few notable projects that certified in Washington in 2015 include:

*Washington, D.C., is not ranked as it is a federal district, not a state.

USGBC calculates the list using per-capita figures as a measure of the human element of green building. This also allows for fair comparisons among states with significant differences in population and number of buildings.