One of only five Marriott Marquis properties in the world, Marriott Marquis Washington, DC is the largest hotel in the city. The $520-million, four-star hotel has 1,175 rooms including 49 suites, and over 105,000 square feet of function space, as well as five separate restaurant spaces. Connected directly via underground concourse to the Walter E. Washington Convention Center, an anchor of the District’s hospitality and tourism economy, the convention center hotel is poised to become the dynamic epicenter and social hub of DC’s downtown neighborhood introducing new venues for meetings, conventions, social gatherings and business travelers.

Paladino served as the green building consultant and the commissioning authority for this highly anticipated project. The challenge presented by the scale and building type was balanced with the need for high performance, pioneering sustainability in supersize luxury hospitality development. An overarching goal was to ensure the project is an asset to the region rather than a burden on Washington’s aging infrastructure.

Demand for potable water use was reduced through the installation of low-flow plumbing fixtures in all guest rooms and suites, and native plantings that reduce the need for landscaping irrigation. An innovative wastewater management system collects stormwater and condensate in a 40,000 gallon tank for use in irrigation and cooling tower make-up water. The system—the largest in the city—is expected to provide 10 million gallons of reclaimed water per year. Not only does this reduce the amount of potable water required and the embedded energy associated with treating and pumping it, but it also reduces the amount of stormwater contributed to DC’s combined sewer/stormwater system, which can overflow into the Potomac and ultimately the Chesapeake during heavy rain falls. The project was rewarded for this approach by earning a LEED pilot credit for Sustainable Wastewater Management.

The 30,000 sq. ft. roof is a combination of high-albedo materials and green roofing to reduce the heat island impact and its location enables and encourages guests to take public transit to the hotel. The project also includes $14 million worth of regional construction materials.

The Marriott project also embraces the existing Plumber’s Union building as the anchor of the southeast corner of the building. The historic seven story brick and limestone structure was designed in a Modernist-modified Chicago School style by Louis Sullivan. Constructed in 1916, the cornerstone was laid by President Woodrow Wilson. The structure, which was declared a National Historic Landmark in 1974, was home to the American Federation of Labor for the first 40 years of its life. Marriott Marquis Washington, DC preserves this historic structure, incorporating it as a guestroom tower with a rooftop lounge.

The Marquis will…be an economic boost to the city, creating job and career opportunities for hundreds of District residents and attracting major meetings from around the world.

This jewel in the crown project represents a major economic opportunity for DC. At the groundbreaking ceremony, J.W. “Bill” Marriott, Jr. said, “The Marquis will…be an economic boost to the city, creating job and career opportunities for hundreds of District residents and attracting major meetings from around the world.” Months before its opening in May 2014, the Marriott Marquis had already hired more than 500 permanent employees, 60% of whom live the DC area. 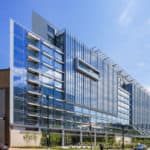 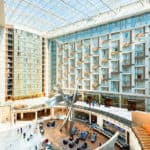